THEY'RE BACK! NIN aka Nine Inch Nails are back on the road for Fall/Winter of 2018 and will be stopping off LIVE at Saeger Theatre – New Orleans on Friday 23rd November 2018, this show is one of the most talked about events of the year, and you can see why! Grab your tickets now for their unmissable show… there's no time like the presence to secure your place in the crowd! 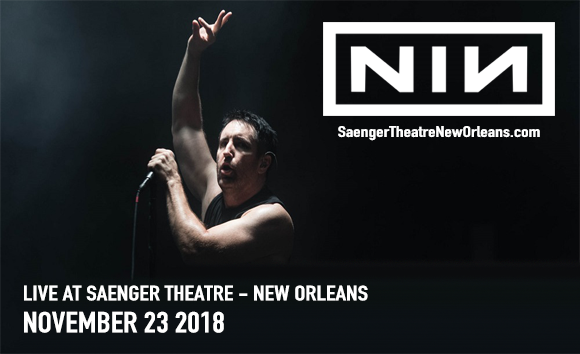 Nine Inch Nails are one of the biggest bands on the rock scene, with their groundbreaking records released throughout the years. For the last three decades the incredible group have received nothing but positivity for their show-stopping performances and non stop record releases, their 2018 tour is the talk of the town for so many as their brand new album 'Bad Witch' is OUT NOW!

The man behind the scenes is of course primary producer, singer, songwriter, and instrumentalist – Trent Reznor, who has well and truly worked his way right up to the top and gained raving reviews for his amazing work in music.

"For Reznor, captivating a sold-out show had seemed effortless, even at the age of 53. Whilst he draws on David Bowie and Joy Division for inspiration, an ever-growing list of aspiring (and celebrated) artists look to him for light. It won’t be long before he, too, joins the pantheon of greats. Perhaps he is already there."

Formed in Cleveland, Ohio, in 1988, Nine Inch Nails is now not run just with Reznor, but also the added extra talent from English musician, songwriter, record producer, and audio engineer Atticus Ross, who was made a permanent member in 2016. During the 1990s, NIN grew their fan base to the extreme and gained major success with their 1994 record – The Downward Spiral and The Fragile in 1999, winning Grammy Awards for the singles "Wish" and "Happiness in Slavery" in 1992 and 1996, respectively. The band has 10 million sales certified in the United States alone, with over 20 million copies sold worldwide to date. Their latest album Bad Witch, marks their ninth studio release and most recent so fans have even more to get stuck into!

Come and catch all of their brand new material LIVE in concert as well as hearing all of their classics and much loved biggest songs to date! There's nothing better than being part of a roaring crowd, seeing your favorite musicians and artists take to the stage!