Rain - A Tribute to the Beatles Tickets

Have you read the news, oh boy?!?! One of The Beatles' fab albums returns to the charts fifty years after it ruled at number one? Such an amazing feat calls for every Beatle fan to come together and celebrate Rain – A Tribute to The Beatles' Abbey Road album live! This will not only be an aural treat, but it is a multi-media spectacle that would make the Fab Four phenomenon come alive right before your very eyes. Rain – A Tribute to the Beatles, featuring the best of Abbey Road will unveil at the Saenger Theatre-New Orleans on Saturday 4th April 2020. There's something in the way that tickets are moving…they're selling fast! Book your tickets now! 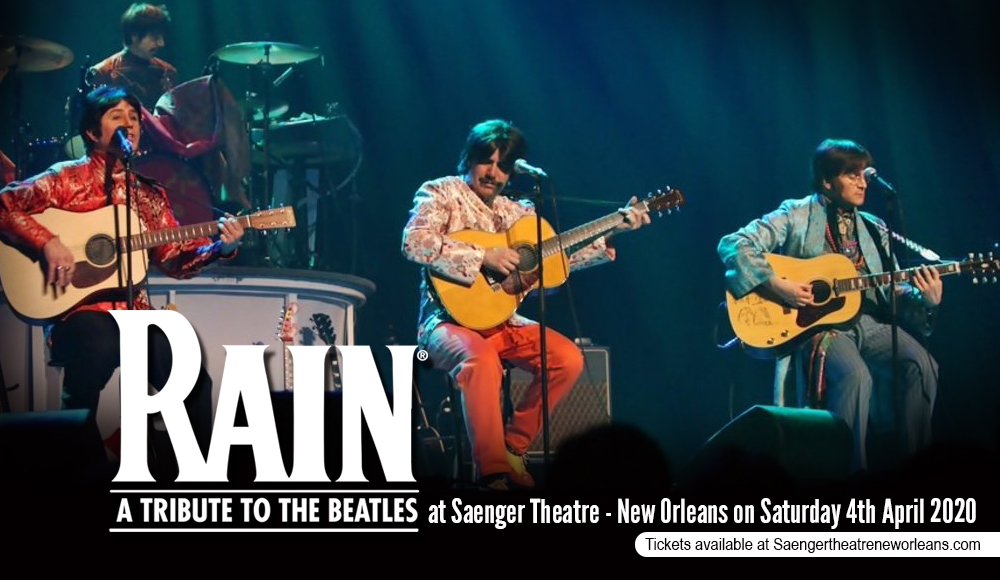 Rain – A Tribute to the Beatles, is said to be the longest-running Beatles tribute act, it predates the popular Broadway show Beatlemania by several years. Rain is both a tribute act and a theatrical production that gives audiences the experience of seeing Beatles' songs performed live that were never done so by the band itself. And that calls for a concert performance that will highlight a phenomenal album that capped the end of an era with the release of The Beatles' final days at the studio that spawned the Abbey Road album some fifty years ago today…

The production of "Rain" may focus on this particular album but is starts out with a chronological journey through songs, looks, and visual imagery of The Beatles. They use high-definition backdrops that feature psychedelic effects, vintage television commercials, and video footage of the Rain cast members recreating iconic Beatle moments. They also use some of those classic Beatles' banter onstage, showing their expertise in capturing the nuances and character of each Beatle member.

Any true-blooded Beatle fan would surely give this a thumbs-up… but why not be there and enjoy the show by singing, dancing, and reminiscing along to the music of the Fab Four? Excitement starts as soon as you book those tickets. Go get 'em now!