We Will Rock You Tickets

Hot off the heels of the resounding box office success of Bohemian Rhapsody, Ben Elton's smash-hit Queen musical We Will Rock You comes to Saenger Theatre – New Orleans on Tuesday 29th October 2019 for ONE NIGHT ONLY as part of its North American tour!

“Annerin is proud to be able to produce We Will Rock You, and we are obviously lucky with our timing,” Annerin Theatricals’ Jeff Parry said in a statement.

“This is a show I have wanted to produce since I first saw it in London. My vision was to be able to produce it in such a way that it plays in soft-seaters as well as cut-down arenas. I thought that Queen’s musical was for everyone and not just the typical Broadway crowd, therefore we’re producing it in a way that can accommodate most buildings and audiences that want to experience the music of Queen in a uniquely theatrical manner.” 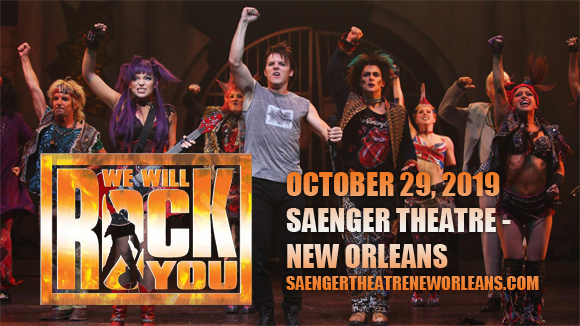 Based on the songs of British rock band Queen, and with a book by comedian, author, playwright, actor and director Ben Elton, We Will Rock You is a musical extravaganza that tells the story of a group of Bohemians in a homogenized and dystopian future, who attempt to reinvigorate freedom of thought and artistic expression in a world where rock music is banned and everyone has become the same…