There’s an unexpected sensation rocking the charts right now, and she’s on her way to New Orleans. Now’s your chance to catch the phenomenal Christian singer-songwriter Lauren Daigle at the Saeger Theatre – New Orleans on Friday 26th October 2018 with her latest chart-topping success, “Look Up Child”! There’s only one way to find out what all the fuss is about – grab your tickets to see this rapidly rising star NOW while they last! 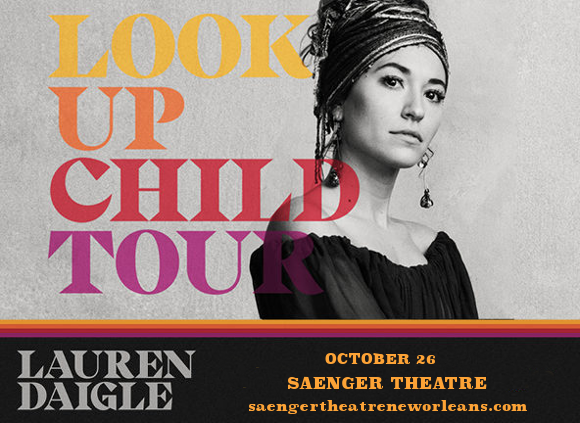 Breaking onto the Christian music scene in 2013 with her EP “Be Joyous,” her debut album “How Can It Be,” was immensely successful, having to date sold over 1 million copies. With so much success so early on, there were high expectations set for Lauren Daigle’s sophomore release.

But far from passing over the bar, she’s all but smashed it and raised a new one. In a remarkable turn of events, Lauren Daigle’s “Look Up Child,” has skyrocked to the third place on the Billboard album charts – behind only Paul McCartney and Eminem, and ahead of the likes of Drake, NIcki Minaj, Post Malone and Travis Scott!!

Maybe it shouldn’t be so surprising – the new album has a pure certainty to it that has the power to transcend genres. “Thematically, it’s all decisively Christian. Sonically, it’s just varied and sophisticated enough to transcend that world,” wrote Stereogum, who described the young artist as a “Christian Adele”. “A traditionalist album in the broader sense, but one that bucks some of the traditions that previously constrained her… All I can say is amen.”

Witness the phenomenon for yourself – get those tickets while they last!!