Rock heroes paying tribute to their rock heroes. Ain't that a sweet double treat for rock fans?! Alternative-funk metal stalwarts Primus will hit the road to pay homage to the music of rock band Rush with an extensive tour dubbed as “A Tribute to Kings.” The focal point of this tribute concert will be Primus' rendition of playing Rush’s classic 1977 album “A Farewell to Kings,” in its entirety, in addition to their own music. The Saenger Theatre – New Orleans is all set to welcome Primus on its center stage on Saturday 30th May 2020. Primus fans and Rush fans are moving double time just to get their hands on these hot tickets. Be part of this double celebration. Get your tickets now! 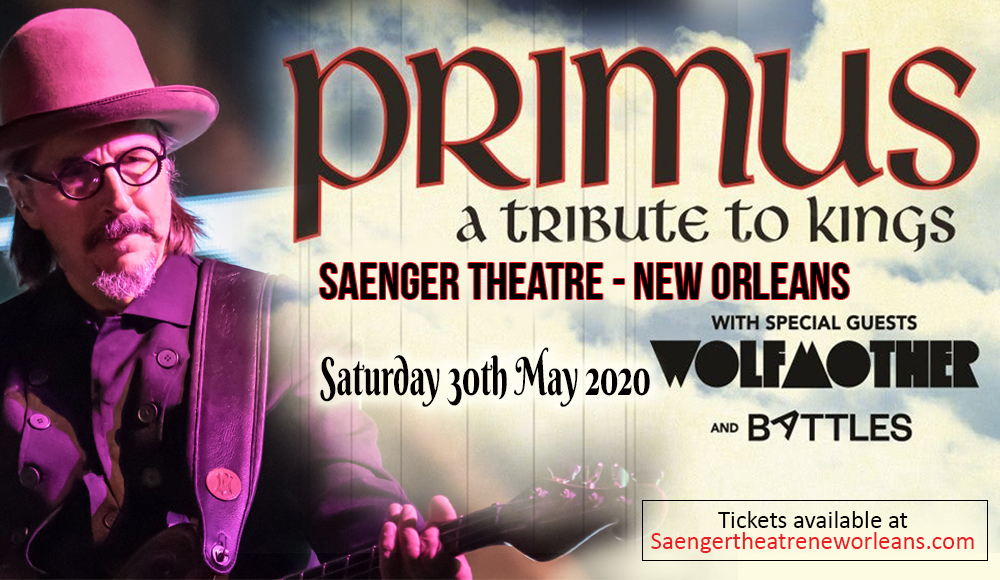 Funk metal band Primus was formed in El Sobrante, California in 1984. The band is currently composed of bassist/vocalist Les Claypool, guitarist Larry "Ler" LaLonde and drummer Tim "Herb" Alexander. During the 90s, a rock band was either "thrash" or "glam". Primus deliberately chose not to take sides. They thrived on the underground where there were no boxed categories to fit in.

Metallica's Kirk Hammett stated in a 1991 interview that Primus are "unique, they're a square peg in a round hole".

Many bands and artists hero-worshipped Primus who's said to have influenced their artistry.

Limp Bizkit's frontman Fred Durst stated in 1999 "I fucking love Primus. Spawned by pure rhythms, Primus has and always will be the most innovative and original source of groove to influence me in this decade. If you listen you will learn."

In the same manner, Primus aims to pay homage to their music hero. Of the tour, Primus vocalist/bassist Les Claypool said, “A little over one year ago, [guitarist] Ler Lalonde and I started kicking the idea around of Primus performing a series of shows featuring an iconic Rush album from our youth. Being that ‘A Farewell to Kings’ was the first Rush record I ever heard, and that it contains my all-time favorite Rush tune, “Cygnus X1,” the choice narrowed quickly. …

“Geddy, Alex and Neil had been superheroes to Larry, Herb and I in our teens, so when we all became pals while touring together in the early ’90s, we were pretty delighted; partially because of the musical geek-out factor but mostly because the three guys whom we had admired so much from afar, turned out to be truly great, down-to-earth humans, and like us, a tad eccentric.

“The ‘Tribute to Kings’ tour will be just as it is implied, a respectful and loving tribute to three spectacular musicians, songwriters, legends and friends.”

Rock fans have carved this date in stone. Save the date and lock-in those tickets now!