Fronted by one of the coolest and most talented married couples in the industry, the Tedeschi Trucks Band comes to Saenger Theatre – New Orleans on Tuesday 29th January 2019 for the second night in a row! Bringing you a lush fusion of Americana, blues, rock and soul, these hard-touring groovemeisters know how to make a crowd go wild! Tickets available now for this intimate and unforgettable show! 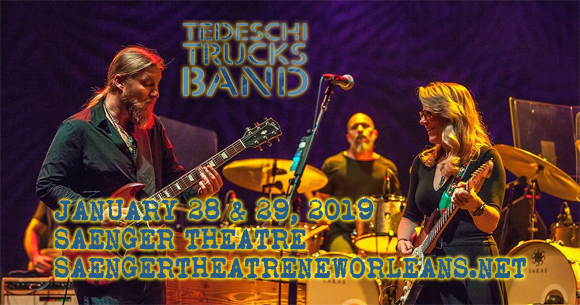 Husband and wife-led American blues rock group The Tedeschi Trucks Band formed in Jacksonville, Florida in 2010. Derek Trucks was the slide guitarist for the Allman Brothers Band when he met Susan Tedeschi, whose own group, the Susan Tedeschi Band, opened for the Allman Brothers Band in New Orleans on their 1999 Summer Tour. The two became involved and were married in 2001. Trucks was also the bandleader and lead guitarist of The Derek Trucks Band, and in 2007 the two toured together with their respective groups and several other musicians as Derek Trucks & Susan Tedeschi's Soul Stew Revival. After the success of the tour and wanting to spend more time together, the couple merged their two bands in 2010 to become The Tedeschi Trucks Band. They released Revelator, the band's debut studio album, the following year, going on to win the 2012 Grammy Award for Best Blues Album. The band's most recent release, the live album Live from the Fox Oakland (2018), was nominated for the 2018 Grammy Award for Best Contemporary Blues Album.