This is one iconic concert that will make you respond with a resounding 'YES'! Hail to the all-time British prog-rock heroes as they make their way to the Saenger Theatre – New Orleans on Monday 15th July 2019. Dubbed as The Royal Affair — a mega tour featuring Yes, Asia, John Lodge & Carl Palmer's ELP Legacy. As DJ Pierre Robert said, "With so much talent in one bill, who knows what'll happen?!". This is one colossal line-up that's not to be missed! Book those tickets now! 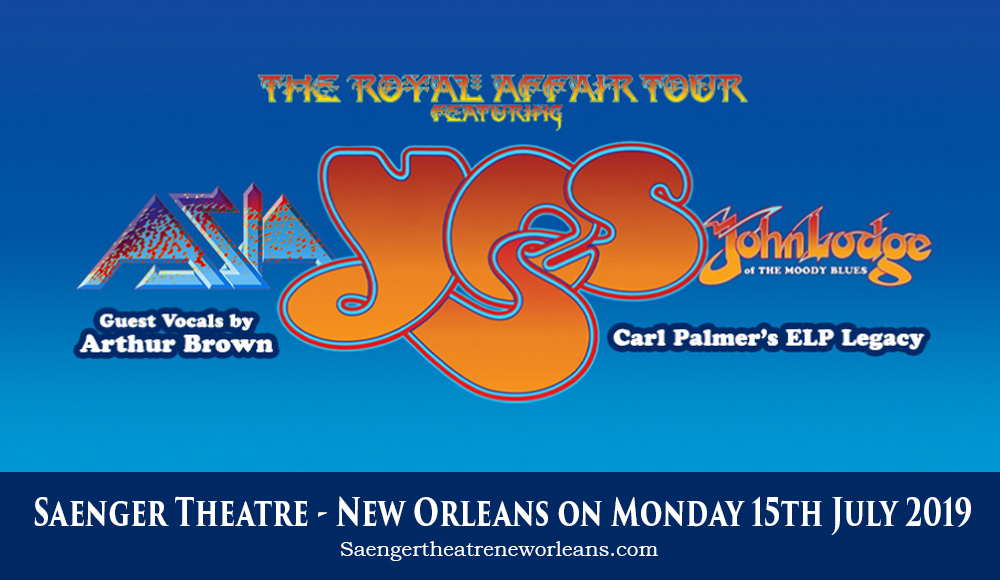 "Owner of the Lonely Heart" may have been their biggest hit, but there's definitely more in-store for British prog-rock fans as The Royal Affair Tour hits the road with nothing but rock royalty such as Yes, Asia, John Lodge & Carl Palmer's ELP Legacy.

As Yes guitarist Steve Howe puts it: “Yes is delighted to headline this celebration of British music which has been so warmly received in America over the past five decades.”

While drummer Alan White exclaims: “I’m looking forward to joining a number of classic British talents that have delighted so many fans over the past half century.”

Geoff Downes describes this as a: “…unique celebration of the British contribution to classic rock over many decades. It will be inspirational to be a part of. And I know it is what John Wetton would have wanted.”

And now the highlights of the show…

Asia will truly delight their fans as the play their signature songs and dedicate a tribute portion to their late founding member John Wetton. There will also be a set dedicated to original guitarist Steve Howe, as well as introduce its new line-up featuring guitarist/lead vocalist Ron “Bumblefoot” Thal and bassist Billy Sherwood.

The classic hits by Rock & Roll Hall of Fame inductees The Moody Blues will be rendered courtesy of John Lodge, plus a heartfelt tribute to the band’s recently departed member Ray Thomas.

True to the British rock royalty theme, Alan White of YES’ who was the drummer on Lennon’s solo material including the recording of “Imagine”, will pay homage to this monumental album.

This is royally awesome! Click on the buy tickets button now!