Due to popular demand, Daily Show host and award-winning stand-up comedian Trevor Noah is bringing his extended Loud and Clear Tour to Saenger Theatre – New Orleans on Saturday 28th March 2020! The Emmy Award-winning performer has a unique and hilarious take on current events and politics that has seen him rise through the ranks as one of the world's most popular comedians, who has eight stand-up specials to his name. Catch this magnetic and hysterical comedian live – tickets available now! 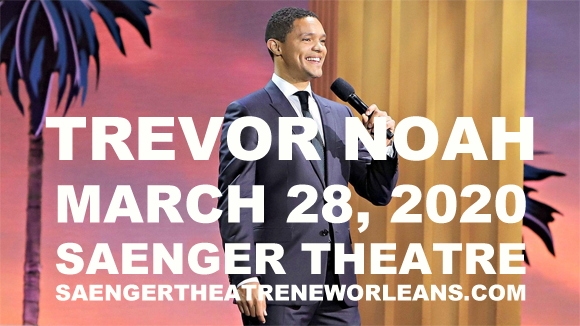 Trevor Noah's rise to fame began in the early 2000s in his native South Africa, where he hosted the educational TV programme Run The Adventure from 2004 – 2006, alongside touring as a stand-up comic. Today, Noah comedian, writer, producer, political commentator, actor, and television host, who is best-known for hosting American late-night talk and news satire television program The Daily Show. Noah's autobiographical comedy book Born a Crime (2016) became a number one New York Times Bestseller and was named one of the best books of the year by The New York Times, Newsday, Esquire, NPR, and Booklist, and in 2018 he was named by Time magazine as one of the 100 most influential people in the world.